We are Ralf and Conny Malz, both born 1967/68 and we lives with our Flats in a suburb from Kassel, our hometown. Kassel is a city in the middle of Germany, surrounded by hills and mountions, with a river and some small lakes in the area. Conny and I are working for the goverment in different tasks. 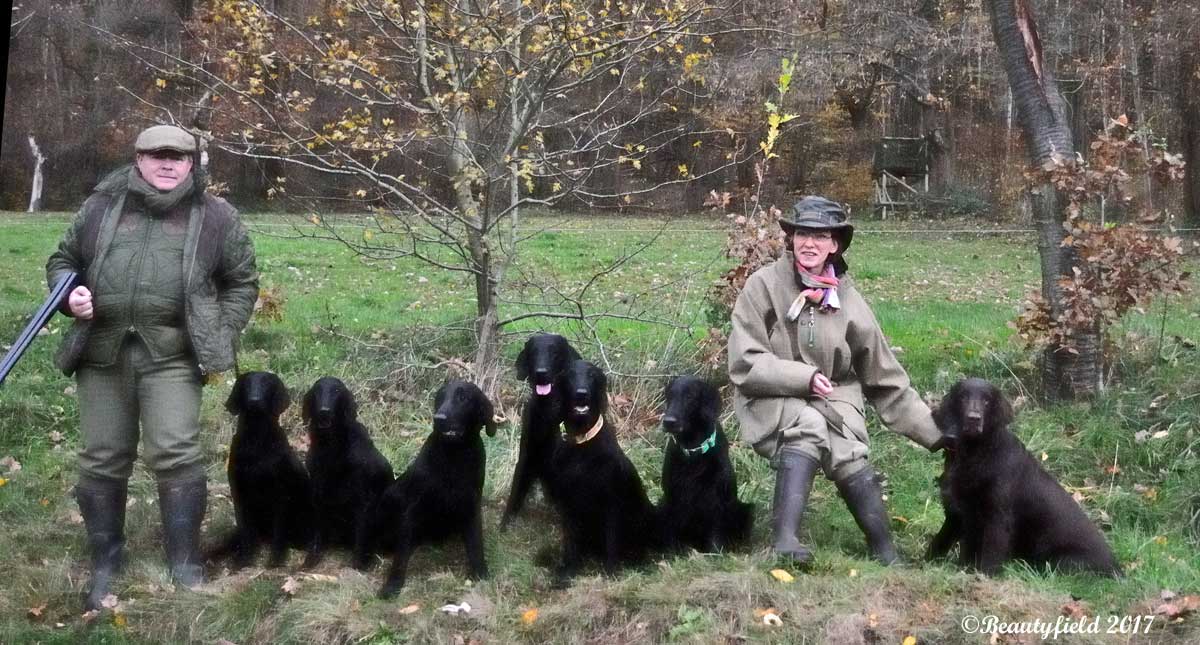 Our Kennel Affix is "Beautyfield´s".

We are doing Hunting, Shows, Workingtests and Obidience, in the past even Conny makes agility.

We are both equal involved in our dog hobby with some mainparts which are different. I`m hunting and being an hunting dog judge (JGHV & DRC), I have another point of than Conny, my wife. So we benefit from each other.
We are both train our dogs for hunt, go to huntingtests and to hunt. But to be honest, no in a way, people do which are doing that as mainpart of their breeding business.
We are working and breeding for Multipurpose Flatcoated Retriever, which means we have to split our interests and time in Show, Hunt, Working Test and Breeding time.
We are not the best in every field, but we try to "Stay our ground" in the first quarter.

We have start our breeding intentions in 2003 and have had our first litter after CIE Wagging Tails Rolf Muntz in 2009. Since than we have developed in breeding and try to increase friendship and realtionships to other breeder around the world.
Since now we are very pleased with the sucess our dogs have, and 14 International Champions and more than 20 National Champions are not as bad for a small breeder which breeds mainly only 1-2 litters a year.

Our breeding ideals are breeding real "Dual Purpose Dogs". Excellent dogs after the FCR Standard, which aren´t blame herself in the showring on the one side and be sucessful at working, huntingtests an maybe sometimes in the future fieldtrails. But for work it´s important to us that our breed produce dogs with good abilities in both parts and not only sport-dogs or showdogs.

Our dogs since we started has been:

The late Merlin was the first Flatcoated Retriever, who entered our life in 1996, followed by his sister.
Leá. This changed our life forever. Merlin died in spring 2005 of cancer, the late Lea goes over the rainbowbridge in spring 2009 with 13 years.

In 1998 we got the late GER CH / VDH CH Camwood Randy the Copper Rebell, our joker, breed by Sven and Andrea Gmür´s Camwood Kennel, from Switzerland. He was a liver stud dog, with excellent results in German shows and work. Randy has been put to sleep at the age at 12 years and 9 month because of age problems. He couldn´t walk anymore.

As International Champion with Show and Working merits she gave us 2 litters, from which we got the late Smilla - CH Calebri's for your eyes only and
CIE CIB Beautyfield's Amy Winehouse after the late MultiChampion Wagging Tails Rolf Muntz.
Stina is surely our most famous bitch, which had been Flatcoated Master winner 2013 in open class /Sweden and is CH in several countries., but even more she gave us 2 great litters, the C-Littter after Popartists which has 3 International and National Champions, the late Bfs Coco Chanel, Clint Eastwood and the alte Colin Farell.
And our F-Litter after Cocktails, with 3 Champions and sucessful working dogs, GBCH Bfs Flashdance at Telurn, S(U)CH FinCH Bfs Frozen Daiquiri, VDH & HunCH Bfs Flatliner & Bfs Fancy Stella Rose. And finally in 2017 she got our J-Litter. With 2 Junior Champions yet.

From the Calebris "BOND-Litter we get the late "CH (VDH) Calebris for your eyes only" called Smilla or sometimes Grinch. Smilla got her  German Champion title in March 2009. She has although sucessful absolved several hunting tests. The VJP in spring 2007, a vildspur beginner test with Godkänt in Sweden in Summer 2007. The JPR in Germany with 260 points with 1. place and the HZP with 176 points in autumn 2007. Furthermore she absolveld the elite huntingstest (VPS) with 192 points in 2nd prize in autumn 2007, as testwinner too. In spring she was first by the Btr Test. At shows she got 1 CACIB and several CAC's.
We have our B- Litter with her. She was mated with S(u)CH Kvicksans Hole in One - " Jerry". A  male which lived in the near of Uppsala and was related to Skrallan over his father, CH Black Micas That´s enough "Sune" - an outstanding male at the time in Sweden, owned by our friend/ breeder Linda Edberg. More you can see under Breeding/B-Litter. The puppies was named after "Fasion Labels" and we take

the late CH Beautyfield´s Balmain from that litter.  Svea give us our G-Litter after CIE CIB Black Amandas Punch Line. The puppies has moved to several countries, so we got some IntChampions and National Champions out of that litter too. As well as an English Stud dog and nice sucess in Germany as well.

On May, 30, 2008 - Ger Club & VDH CH LuxCH Black Mica´s for honor & glory / Skrallan moved to Beautyfield´s for the posibility of a 2nd breeding line. A nice temperamentful girl from Black Mica´s Kennel in Uppsalla/SWE. Many thanks to Linda. Skrallan is a daughter from SUCH Black Mica´s that´s for sure and NUCH Hempths Vally-Vic. A granddaughter of twotimes Stockholm winner, SUCH FinCH SV Black Mica´s Don´t Quench the Fire. Skrallan has several working and hunting tests absolved. She was breed in 2012 with GBCH Calzeat Causa Commotion (Denver) and 2016 after S(U)CH Flathams Häljt a Hoole Shläng  (Duster) . After Denver we got 3 International and National Champions. Dusters offspring has some sucess, but they are still young.

And we still own "Pelle" our Boy from Black Mica's which ist sire of 4 litters yet and "Tex", who has although 4 litters now.

Our M-Wurf after CH Beautyfield's Earendil will hopefully arrive in March 2021. 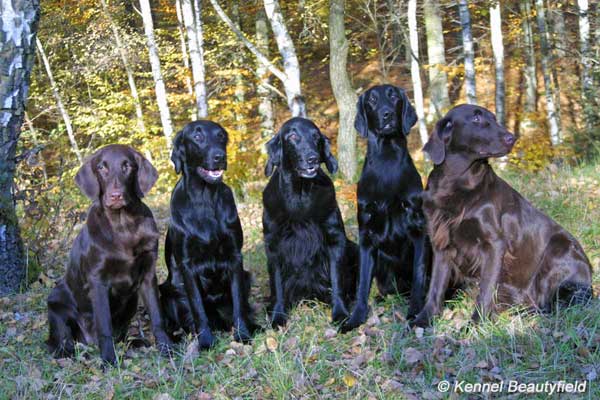 We show our dogs at several shows a year in Germany and other countrys and trained them for tests and hunting activites.
we`ve now owned and breed 20 International and National Champions in Germany, United Kingdom, Sweden, Finland, Germany, Japan, Italy, Luxembourg, Hungary, Poland, Belgium, Austria, the United States & Canada and more.
Our dogs are participate in Hunt, Fieldtrails, Workingtests, Obidiencetests and are still familymembers. We try to breed real Dual Purpose Flatcoated Retriever.

All of our dogs lives in our house as real familiy members and we enjoy her quality as pet in the same way like their working qualities and their sucess at the show ground.

But with all in our life, sometimes you´ve fun and luck, sometimes not.

Whoever has said, "Flatcoated Retriever are the greatest dogs of the world", he has found the right words for this supereb dogs. 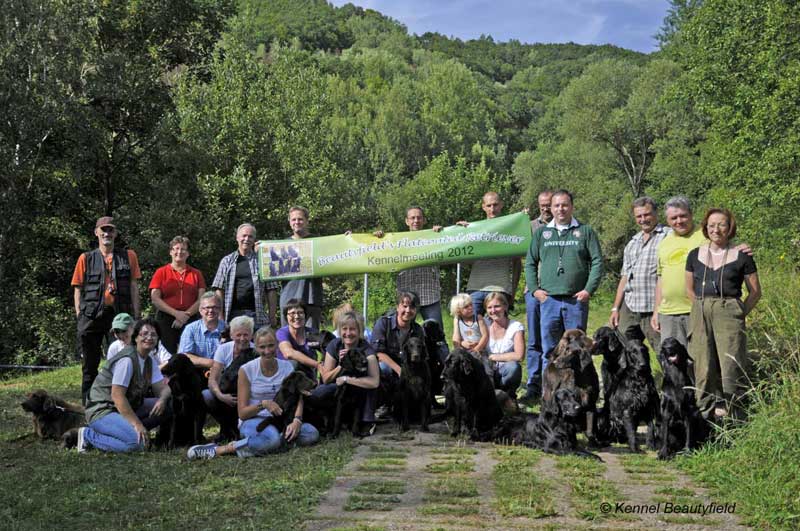